Golden Age comics were racist. Everybody knows that. It’s an old observation, and I’m not here to add to it. I’m not even here to take them to task for it. Even though they were super racist.

Way more racist than that!

Okay, I guess we’re doing this — the Golden Age of comics was this racist: 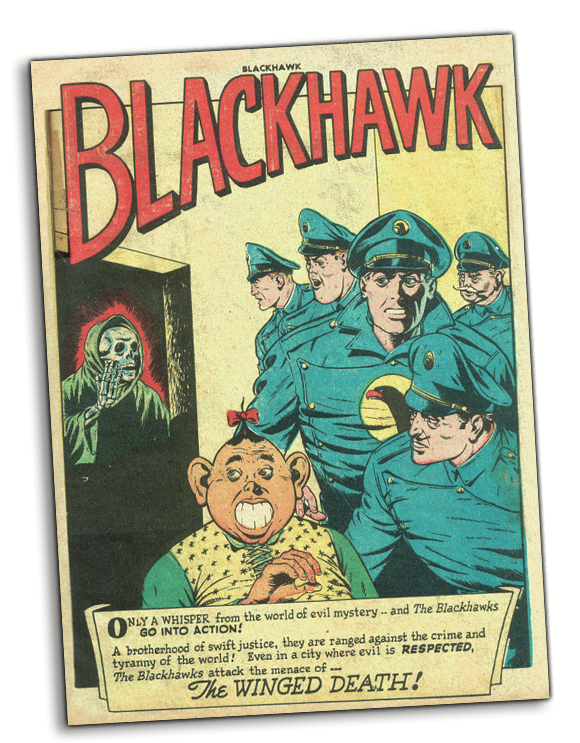 That monstrosity up there is named Chop Chop and-

Actually let’s pause and reflect: Isn’t it amazing that you know exactly what monstrosity I’m talking about, despite him sharing cover space with a screaming skeleton?

Chop Chop was a supporting character for a crime-fighter named Blackhawk, and I’m not here to yell about Chop Chop, I just… I just want to figure him out. Every single human being that meets Chop Chop has the same question, and I share it: What the fuck even ARE you?

Chop Chop is a civil war of racial stereotypes. Look at him! He’s a shambling Frankenstein of rival prejudices. It’s like five different racists set out to design him and the brainstorming session devolved into a fistfight about the best way to hate a Chinese guy.

So many of these tropes are just lost to the passage of time — once upon a time we hated the Chinese for wearing bowties in their hair and having onion heads. Where the fuck did that even come from? We need a racism museum just to preserve and understand old hatreds, except that’s every museum.

Chop Chop is so racist that it actually became crippling — he’s barely recognizable as a human up there. You’ve got six unremarkable white guys and a sloth that got lost in a laundry basket. You’ve got a Portland kickball team and then in the middle there’s a quokka from a Dreamworks movie about ugly animals that still deserve love. Look how far I have to go to find visual metaphors for that creature that is just supposed to be a Chinese dude!

What is this? What even is this? I would guess interesting turnip, hot air balloon accident, or elephant from behind before I guessed this was supposed to be a human being.

Jesus Christ, look at that dialogue.

“This is you — ‘Is biggee city for shipee silk … all ovee world! Plenty silk… plenty BAD MAN… yes!”

“Good god, I’m not that bad am I? I must reconsider my ways!”

Chop Chop is so virulently racist that it actually interferes with the visual storytelling of the comic. Every panel you have to squint to see if that’s Chop Chop doing a somersault or a monkey fellating itself. From panel to panel, from issue to issue, he’s constantly shape-changing based on hate, his entire form depending on how late the artist’s Chinese takeout was that day.

Okay, what the fuck is that. What even is that? It’s like an intentional study designed to showcase the inherent racism of Chop Chop: Two heads floating in a void, one a perfectly normal white man, the other a sick vole that died on a barbed wire fence last week.

That second panel: So he’s a perfect orb in profile? He has, he has fuckin’ round teeth that just follow the contours of his head?! It’s not that I’m mad about his portrayal. It sucks, it does suck, but I used the R-word 8,000 times in 2004 — we’re all on the wrong side of history at some point. I’m just lost with Chop Chop. I don’t even have the groundwork to understand the start of this racism — did we used to think all Chinese had baleen and fed by filtering the air for oriental sky plankton?

So Chop Chop is not great to look at, and extremely not great to read. If you’re hoping he’s going to be redeemed by his stories-

Hey, not every story’s about a laundromat!

Many are about mistaken identities.

Hey, real quick, why are there so many cases of mistaken identity involving the one Chinese character? Despite him looking like a dried apple head and talking like a fresh motorcycle accident? I bet you can guess!

See, see — that. What the fuck is that? You can always tell a Chinese man by his fat facial features and open mouth? That’s how I recognize a sick catfish. Did they have different Chinese people back then? Am I not getting this because all I know are the Chinese 2.0 we have today, and I’m looking at the beta test Chinese my grandpappy took part in?

Here’s Chop Chop and one of the men confused with Chop Chop, side by side. To show the readers which abomination is the real one, they painted him bright red. Maybe that’s Chinese – you don’t know!

Ancient Chinese Trick, huh? I think painting a fake tunnel on a wall and waiting for your enemies to run into it was Sun Tzu, actually.

There’s an important Chop Chop revelation hidden in the next one, where he’s once again mistaken for somebody else — this time an “oriental king.”

I know your mind is reeling because in the first panel he looks like the Olaf balloon in the Macy’s Day Parade had an accident, in the third panel he looks like a Bob’s Big Boy after a fire, and in the last panel he looks like a rat in a wind tunnel. You’re trying to track a character by visual consistency instead of the consistency of the bigotry, is the problem. I know you want to focus on the sentence “Whee! Chop-Chop not have to be cookee tonight!” because it’s dense, it is dense with problems, it is a fine pemmican absolutely packed with offense so you can keep your hatred up on racist night raids.

But we’re ignoring all of that to focus on this:

He still talks the same in his thought bubbles!

Those should be clear and legible as he thinks to himself unhindered by a foreign language, but he does that fucking accent inside his own head! I haven’t visited Tumblr in years, but is this what they mean by internalized racism?

In the Blackhawk comics, Chop Chop is such a gleeful idiot it might be a crime just to have him this close to open machinery. He’s actually a good fighter, though — they gave him that one thing. Nothing else. He’s a total idiot. He is a nigh-indestructible, brutal killing machine that can only be stopped by shiny bits of coin and passing kites.

But he’s not just a skilled martial artist, like you’d expect of modern racism — he is a berserk terror. He treats every unsmashed head like a labrador treats a thrown ball. He’s less Bruce Lee as Kato and more some kind of mutated violence goblin:

He just happily obliterates every limb in his path without thought or permission. He’s like an elemental whose element is strangling.

You can see for yourself that it rules.

If that was just a shaved orangutan the Blackhawks taught six words and how to use a bat to, this would be an article about my favorite character in anything.

Really, the only problem is the horrific racism.

You just cannot pin down Chop Chop. Like you get that they had no respect for him, but there’s no consistency in how that happens. Take his accent:

In the first panel he replaces all R’s with L’s — standard racism stuff. I understand this. I don’t like it, but I get it. Look at the second panel: where he not only swaps the R out, but adds an extra L, and then has no problem saying “interesting contrivance!” and “excellent evidence to send both of you to prison!”

Did the author forget to be racist for half a panel? Did he leap up in his bed that night going “fuck! I forgot to subhumanize Chop Chop in that scene where a foolish crook tries to attack a Chinaman with an iron — their own natural weapons!” Was it a chore to write out the dialogue you wanted, run it through Racist Translate, and then back to English? Look at that third panel — “Chop Chop is seeing things, you bletcha!”

Before it was just bigot transliteration, now there’s a wild implication that Chinese just like L so much they put it in every word, like a Sesame Street sketch.

I pulled these three sequential panels from an issue where Chop Chop meets the actual devil, which is awesome — most Blackhawk stories are about two white dudes going to Thailand to molest women and punch men, aka the ol’ techbro vacation — but I brought these because of another ingredient in Chop Chop’s bizarre racism gumbo:

He’s a total idiot, immediately fooled by the devil who came disguised as Obviously the Devil. We’ve covered that. But he screams “GLOLLIES!” and “Wheee! Jet-plopelled whoopee!” when he sees a plane. That’s beyond idiot. That’s alien. That is not something from this world.

You show this to the most vile racist alive today and he’d tell you it should be toned down because it’s better for the movement to focus on one simple thing that sounds reasonable at first, and then he’d ask if you’re against child molestation.

Here’s what I mean when I say Chop Chop isn’t just racist: Every issue of Blackhawk was chock full of racial stereotypes…

Sure, the Mexican guy is a bandito with a sombrero and a ropy mustache; sure, that sucks — but at least he had human proportions before the violence goblin ate his legs.

Bigotry alone cannot explain Chop Chop — in those three panels above you can see normal racism on display right alongside Chop Chop’s gonzo racism and it’s like slipping a real bear into a costume contest. Nobody’s fooled by the bear, they just don’t want to be the first to react because it might eat their legs.

The time the Blackhawks went to China.

That’s not great – it’s not a great way to draw Chinese people, but it’s a far sight from the free association at a Trump Rally that is Chop Chop.

What can this possibly mean?

I have two theories:

Chop Chop is not broadly racist, he’s an extremely targeted jab. Those dudes above are supposed to be other Chinese people? It doesn’t add up. Chop Chop isn’t racist against all Chinese — he’s racist against extremely specific Chinese that I’m not traveled enough to have stereotypes for. I can hear the artist explaining “no, Chinese are fine. It’s those Yinchuan guys I hate! Fuckin’ Yins – always underground like mole people. Shouting ‘YIPPSY DLOODLE’ and eating ankles.”

Chop Chop isn’t racist at all. Those guys above are normal Chinese people, and Chop Chop is an actual inhuman violence goblin. Like if you told the artist he’s being really racist with Chop Chop, he’d say “what the fuck are you talking about? You thought that freakish fist golem was a person? That’s an orangutan the Blackhawks taught six words and how to use a bat! I could not have been more clear about that in my art.”

…
This article was brought to you by a hot tip from Priest of Toe and Sock Javo, who is not legally allowed to be proud of that.

Even better was when Blackhawk was retooled into a pretty straight superhero series after the success of the ’60s Batman TV show, and they tried and failed to make Chop-Chop “cool”.

Thank god they didn’t have Chop-Chop in the Blackhawk episode of JLU.

In Hell, as the damned souls of racists writhe in agony.